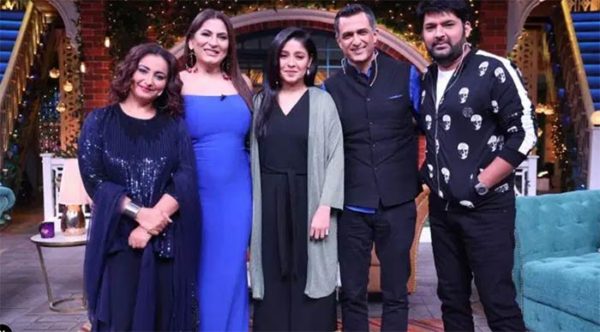 Talking about her journey in the industry, Divya Dutta will share that Shah Rukh Khan and Salman Khan are definitely her best co-stars. She will talk about how the two Khans have very different working style. Divya will also reveal that while Salman taught her how to cry, SRK used to laugh out loud with her on the sets of Veer Zaara.

Archana talks about her association with Sunidhi

Archana Puran Singh will talk about her bonding with Sunidhi Chauhan. Archana will share how Sunidhi’s father left his job and came to Mumbai to make Sunidhi a great singer. Her dad Dushyant Chauhan was very supportive, which helped her become a successful singer. Archana will mention that she used to host singing shows when Sunidhi was very young. During that time Archana used to get Sunidhi on the stage by holding her finger.

Sunidhi Chauhan will share that she has heard some fun stories of how music directors created sounds. She will go on to narrate that she was once told that RD Burman heard someone gargling beside him in the washroom. He liked the sound and decided to use it as the background music of Amitabh Bachchan’s character Babu in Satte Pe Satta.

Sanjay Suri on how My Brother Nikhil’s production was crowdsourced

As Kapil Sharma will appreciate Sanjay Suri’s work in the industry, the actor will go on to share a very interesting fact about his film My Brother Nikhil. Suri will reveal that the film was one of India’s largest crowdsourced projects. 400 co-producers from over 40 cities across the globe contributed to the filming of My Brother Nikhil. He will also share that the Onir directorial had such a tight budget that they didn’t even have food available on the last day of the shoot. And they had to get someone to sponsor the meal for the team. Sanjay Suri will add that when such a film goes on to win the National Award, it’s a victory for talent and creative artists.