No Indian awards recognized our work

Home // News and Media // No Indian awards recognized our work

Actors Juhi Chawla and Sanjay Suri took to their Instagram spaces today and marked 17 years of their film ‘My Brother Nikhil’. The film follows the story of a bright youngster Nikhil Kapoor (played by Sanjay) whose world comes crashing down after he tests positive for HIV. He then finds support in his sister Anamika (played by Juhi Chawla) and his partner Nigel (played by Purab Kohli). Directed by filmmaker Onir, My Brother Nikhil released in the year 2005 and talked about difficult subjects like HIV and homosexuality.

Earlier today, Sanjay Suri took to his Instagram stories and shared a video showcasing different scenes from the film. Sharing the video, he wrote that his film was not recognized by any Indian awards. His caption read, “17 years ago we managed to release a tough film for that time. No Indian awards recognized our work, while internationally the film was making waves. Never give up and keep doing your own thing! They will notice you one day!”. He further tagged his co-actors Juhi Chawla, Purab Kohli, Dippanita Sharma, Shweta Kawatra, and others. He also tagged his director Onir. Juhi Chawla reshared Sanjay’s video on her stories with a pink heart emoji. 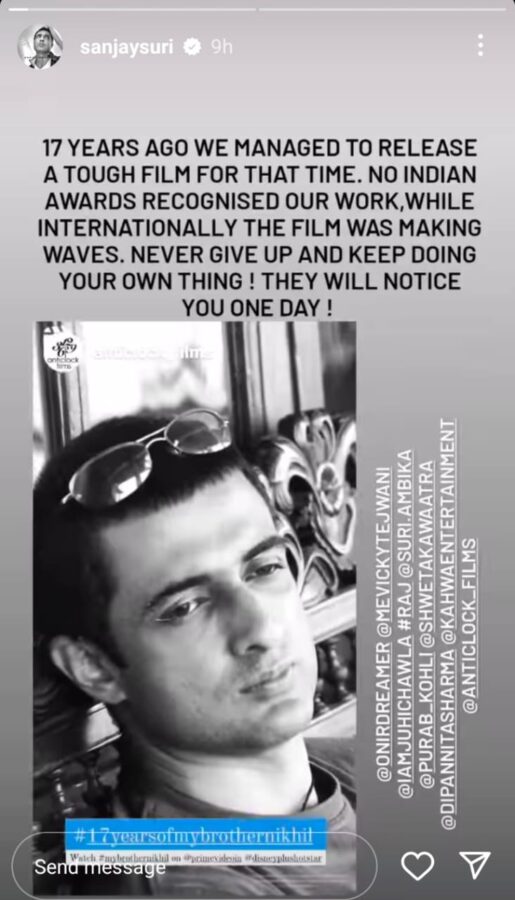