Tuneful music, new language reflecting urban sensibilities and situations are there in a large measure in `Jhankaar Beats’, slated to release tomorrow in the city. The film is about three young men, their passion, profession and personal lives, writes SYEDA FARIDA. 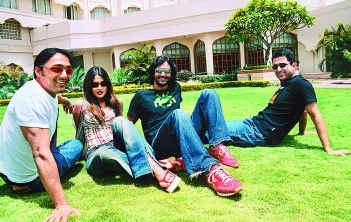 CINEMA IN the country has seen vicissitudes of change over the many decades of its existence from the silent era to the talkies, from Geva to Eastman colour… technically it is slick and post-production facilities are state-of-the-art. It has entertained the classes and masses with various genres like romance, action, thrillers, musicals, family sagas and so on. The parallel cinema movement as opposed to mainstream gained momentum from the 1980s. Today there is talk of crossover cinema. With the world being a global village today cinema is catering to the Diaspora and others. There is `Hinglish’ cinema as well for the urban crowds – the yuppie and the old. These provide a breather for those who are fed up of seeing the same themes reprised in new ways. Bend it like Beckham, Everybody says I’m Fine, Mr. and Mrs. Iyer are just a few examples of this `new wave’ cinema which is slowly gaining ground. Although made keeping in mind the urban markets it was balle balle if they crossed over to the Hindi belt as well. Jhankaar Beats by Sujoy Ghose falls into this category.

“The premise is not exactly weighty or philosophical here. For instance, Jhankaar Beats is striking because it is fresh and energetic,” says Rahul Bose, who plays Rishi, a real life character, battling divorce proceedings and a no-nonsense wife Nicky (Rinkie Khanna). The film in fact is a lifelike narrative— one year in the life of six people, operating on three different levels–personal, professional and passion (for music), and not just about male bonding.

There is the happily married Deep (Sanjay Suri) and Shaanti (Juhi Chawla) with the former having adjustment problems when his mother in-law comes to stay with them. “The movie highlights this side,” says Sanjay Suri. The youngest couple, Riya Sen and Shayan Munshi, is representative of the generationext, and of the host of emotions involved. “The flick presents situations which are contemporary,” says Munshi. BEAT POETS: A still from the film. 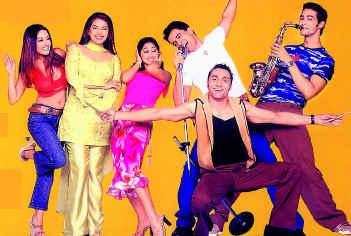 On the professional level, the three men work in an ad agency on a condom campaign one of the issues that has raised eyebrows. “How childish can you get? We are not becoming a one billion sitting under trees. Nobody talks about birth control. What is the level of intellectual debate in the country,” poses Rahul Bose.

Yet another issue that clouded the film has been its similarity with Viveck Vaswani’s Dil Vil Pyar Vyar – reason the R. D. Burman connection. Sanjay Suri, who acts in both the films, finds them different in terms of cinematic experience. Also, “in Dil Vil Pyar Vyar, one finds rearrangement of R. D. Burman’s music with no reference to him. While, Jhankaar Beats presents fresh songs by Vishal-Shekhar. The numbers have a strong reflection of R.D. Burman’s music, certain instruments he used and the vocals typical of his style. We have Amit Kumar rendering a few tracks to make the effect complete. Also, R.D. Burman is a living character in the film, be it the music contest the three professionals prepare for or as a reflection of a generation that has grown up watching Sholay and listening to R.D.Burman, that they represent,” he says.

Incidentally, for debutant director Sujoy Ghosh, who grew up listening to Pancham da and Kishore Kumar, the film, “started off as an exercise in script writing around an R.D. Burman track Duniya mein logon ko. I have been a big time admirer of R.D. Burman. Music is a vital part of the film,” he says. Having chosen to tell the story in an urban perspective, “albeit even though the issues are found in various parts of the world,” he explains, as he hopes that the film penetrates the commercial cinema market.

At the recent promotion at Bottles & Chimney was a witness to this, where the audience were overjoyed to see the stars. “The response has been tremendous. Tickets of the premiere of Jhankaar Beats have been distributed among the elated gathering here. We will be getting more of interactive shows with film stars to the twin cities,” says Sanjay Chimnani, of Bottles & Chimney that in fact screens 20th Century Fox and MGM blockbusters on Sundays.

And one good reason for the generationext to watch the film, apart from its tuneful music, is the new language and the sensibilities of the urban population it reflects and the realistic situations projected therein that people can relate to.

“There is no room for the mein tumse behad pyar karta hoon today. The norm is to be straight and simple cutting the over the top melodrama.”

“And it is heartening to find film makers come out of the formula business, as there is no formula to success,” sums up Sanjay.